How might we transform an old-fashioned gas guzzler feel artsy to approach a new breed of potential luxury buyers?

The global Lincoln brand has been reinventing itself to become a world-class luxury brand with compelling vehicles and an exceptional, highly personal ownership experience to match. In particular, the All-New MKZ play was born to be a crucial role for Lincoln’s reinvention among young generations when it was officially launched in Korea in May, 2013. However, Lincoln brand used to be identified as an old-fashioned brand among Korean millennials and many customers believed that U.S.-brand cars are gas guzzlers. In 2013, Lincoln Korea had represented approximately 25 percent of Ford’s sluggish annual sales. Lincoln had to be a key part of Ford’s sales strategy in Korea and needed to change perception to effectively speak to a new breed of luxury buyers. Thus, the team requested to create a stronger brand identity to resonate with younger generations and make a growth engine for Lincoln Korea.

There is no better way to truly empathize and understand our friends’ desires and opinions on a given subject by asking questions directly. Interviewees included young entrepreneurs in various fields, freelancers, young professionals and graduate students. Based on the ethnographic research on targeted groups, which later named Urban Achievers – higher-income urban professionals with sophisticated tastes, key insights were identified as the following:

Based on the insights gathered, the following questions arose:

Lincoln Jazz Night, which began with the launch of Lincoln Korea’s Facebook page as part of its monthly cultural events, has become Lincoln Korea’s annual event since 2013. It was highly recognized for its impressive fusion between American culture jazz and the premium car brand, Lincoln.

Since the official Facebook page began in 2013, Lincoln Korea’s monthly cultural events have provided opportunities for Lincoln Facebook fans to encounter the best performances in music and art, which accords with Lincoln’s philosophy and design.

As a first step, the Lincoln Korea’s first social media channel was launched in May 2013 to directly speak to Urban Achievers. By implementing an online series of monthly cultural events which invites selected loyal followers to the most trendy performances in Korea, the year-long campaign successfully raised awareness among social media followers and media channels. The monthly event was proved to be relevant to the Lincoln brand and helped solidify itself as a strong and avid supporter of the arts. Sustaining momentum after its official launch, unique stories and artist interview series were shared across multiple media channels – Traditional print and broadcast media, automotive media, consumer media, power bloggers and social  channels were all used to  promote its new positioning. 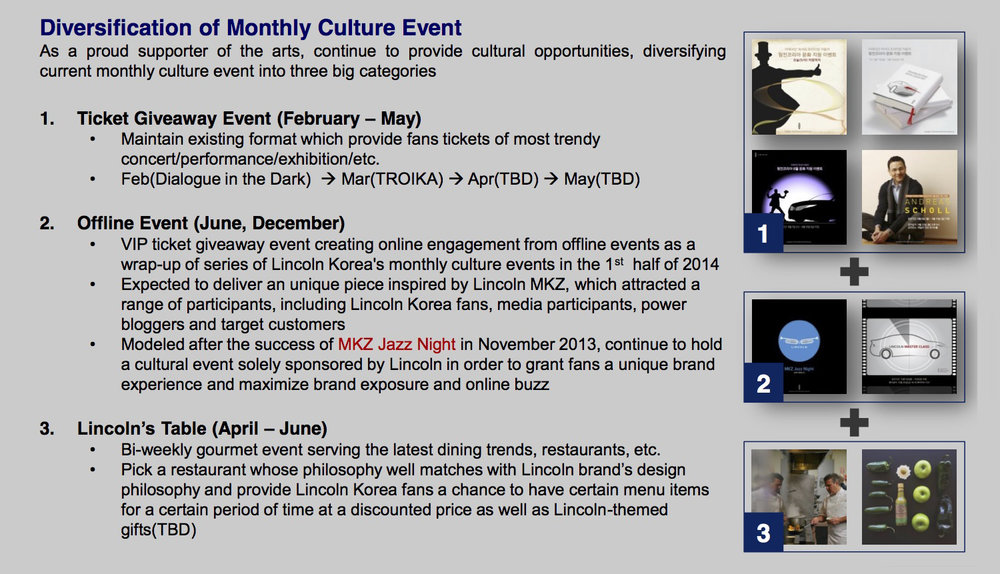 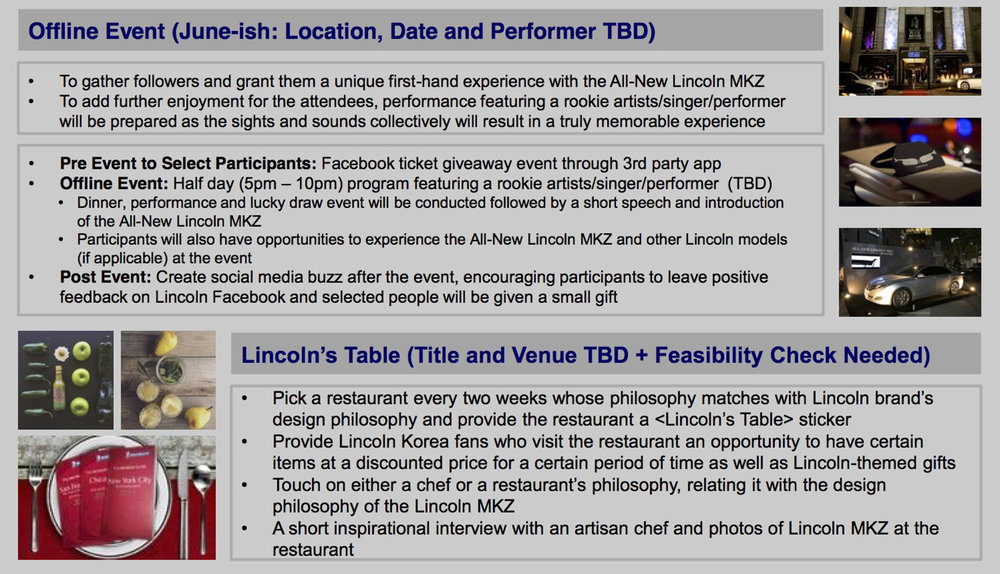 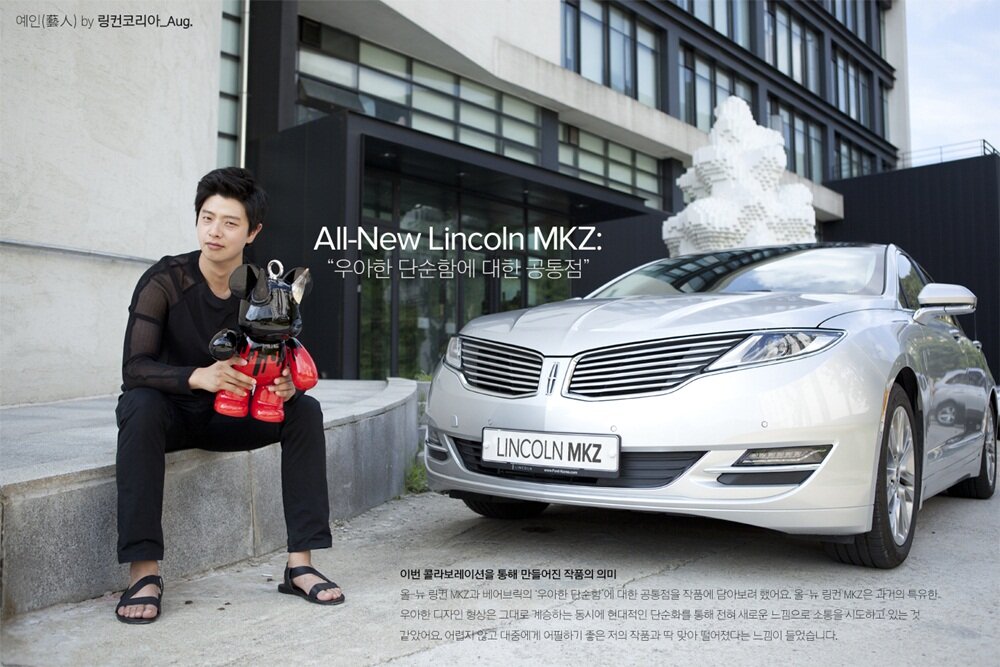 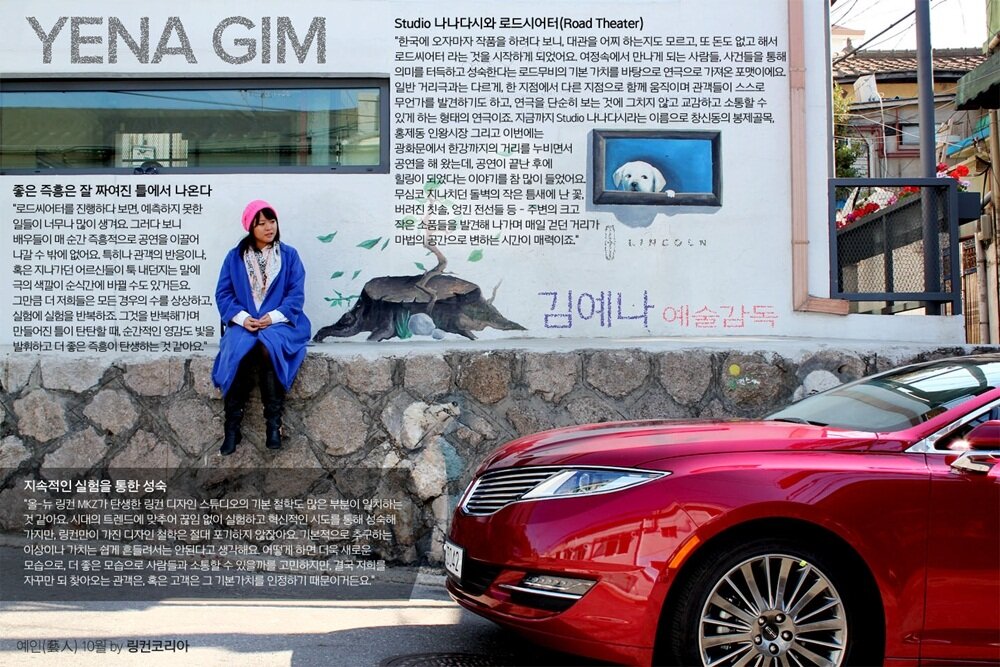 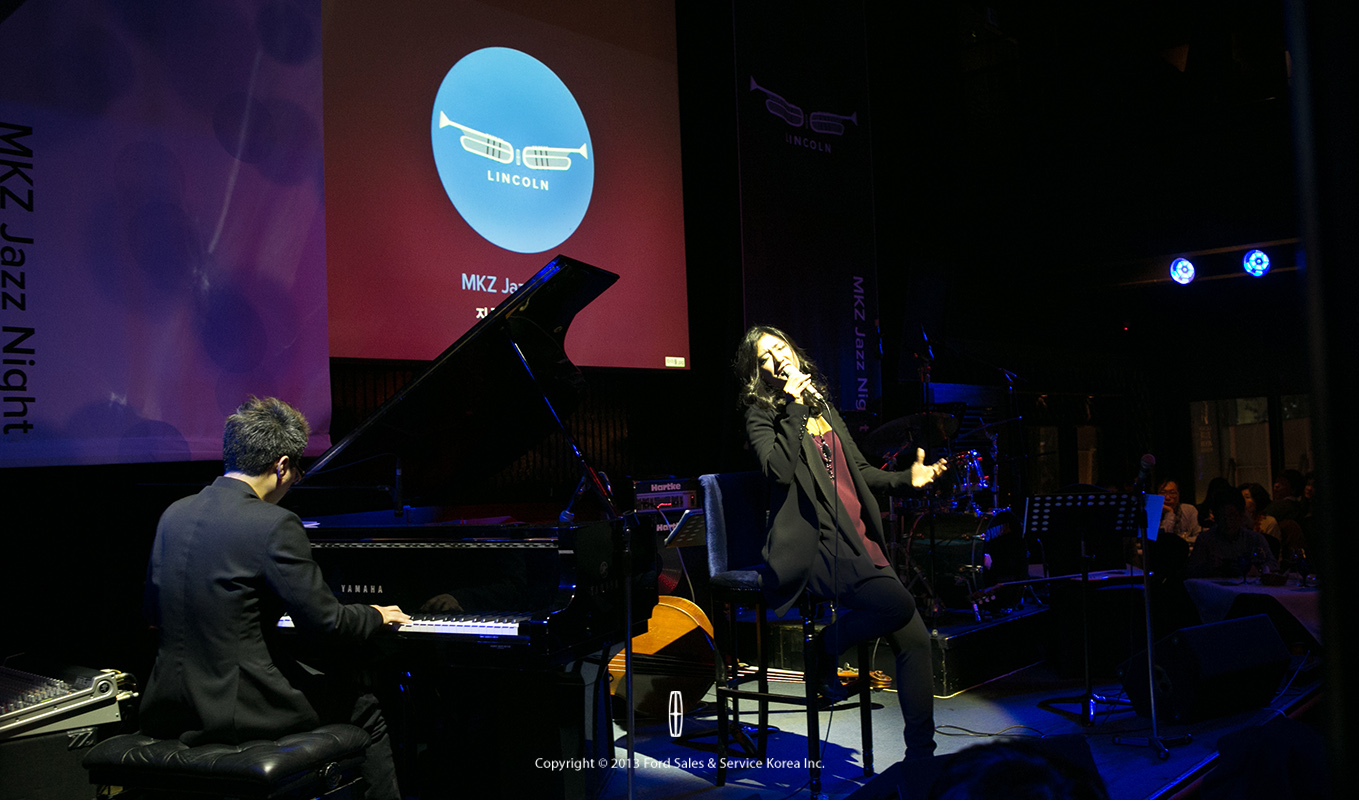 On November 30th, Lincoln Korea held an offline event named Lincoln Jazz Night at Once in A Blue Moon, a one of the most famous jazz club in Korea, as a grand finale of series of Lincoln Korea's monthly culture events this year. The event successfully attracted a range of participants, including journalists, VIPs, celebrities and target customers. In addition to the main jazz concert led by the two top-tier female jazz musicians, a casual conversation session. The two jazz divas discussed their interpretation of the theme and ultimate music inspired by the All-New Lincoln MKZ. Hosting an event of this nature, under the Lincoln brand, was expected to create a strong association between Lincoln and the arts, and ultimately, position Lincoln as a cultural icon in Korea.

‍Jazz is America’s indigenous art form, having its birth and evolution in the United States. It has contributed to and been a reflection of American culture just as Lincoln brand positioned itself in the states as well The All-New Lincoln MKZ is impressive representation of American luxury sedan with an ingrained element of American styles and attitudes.As Lincoln brand has related itself with a lot of artists by creating a variety of artwork fully inspired by the All –New Lincoln MKZ, Jazz has also been inspiring a lot of artists to create a variety of artwork. As Jazz is universal, Lincoln brand is planning to be performed and listened to by people of virtually every ethnicity, religion, and attitude.

The  Jazz Night focused heavily on not only engaging media, but also on leveraging Lincoln’s Facebook page, by inviting its followers and featuring high- profile Korean social influencers. To increase engagement and expectation toward the event, the Lincoln Jazz Night ticket application event was executed through 3rd party Facebook app development – and it generated a total of over 1,500 likes and comments. The ticket . All of participants were asked to submit short descriptive writing under the theme of ‘Lincoln’ and ‘Jazz’. By encouraging participants to connect both keywords in their answers, it helped to screen out the loyal Lincoln fans that are actually following Lincoln to nurture them to become online/offline influencers in the long run.

As a result of ticket event, a total of 80 couples were selected as a winner of Lincoln Jazz Night and 2 invitation cards were sent to each winner. (Total 160 people were invited to the event) - Lincoln Korea Facebook also ran Facebook ads for event posts and Facebook page like ads to ultimately increase fan volume of the Facebook and fan engagement from Nov. 26. 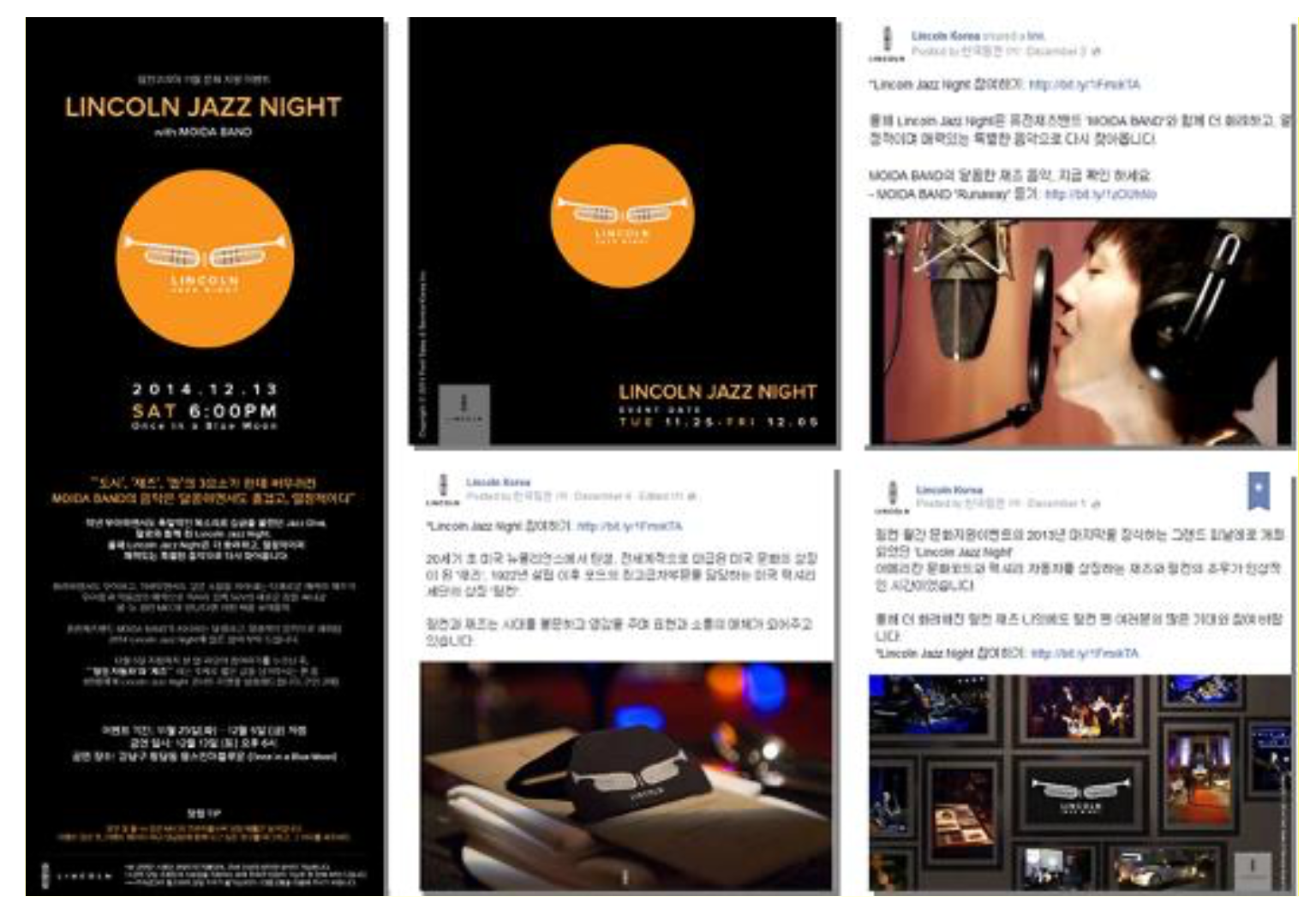 One of major purposes of the art-oriented campaign is to more effectively convey brand messages for Lincoln as a cultural and trendy icon. Thus, along with careful jazz musician and target audience selection, the event also focused heavily on visual communication design such as invitations, lucky draw coupons, posters, banners and so on. All decorative items maintained consistency in design, including trumpet-themed split wing grille with blue moon. In particular, attendees showed great interest in the LP-themed invitation and lucky draw coupons and it generated a lot of social buzz even after the event. 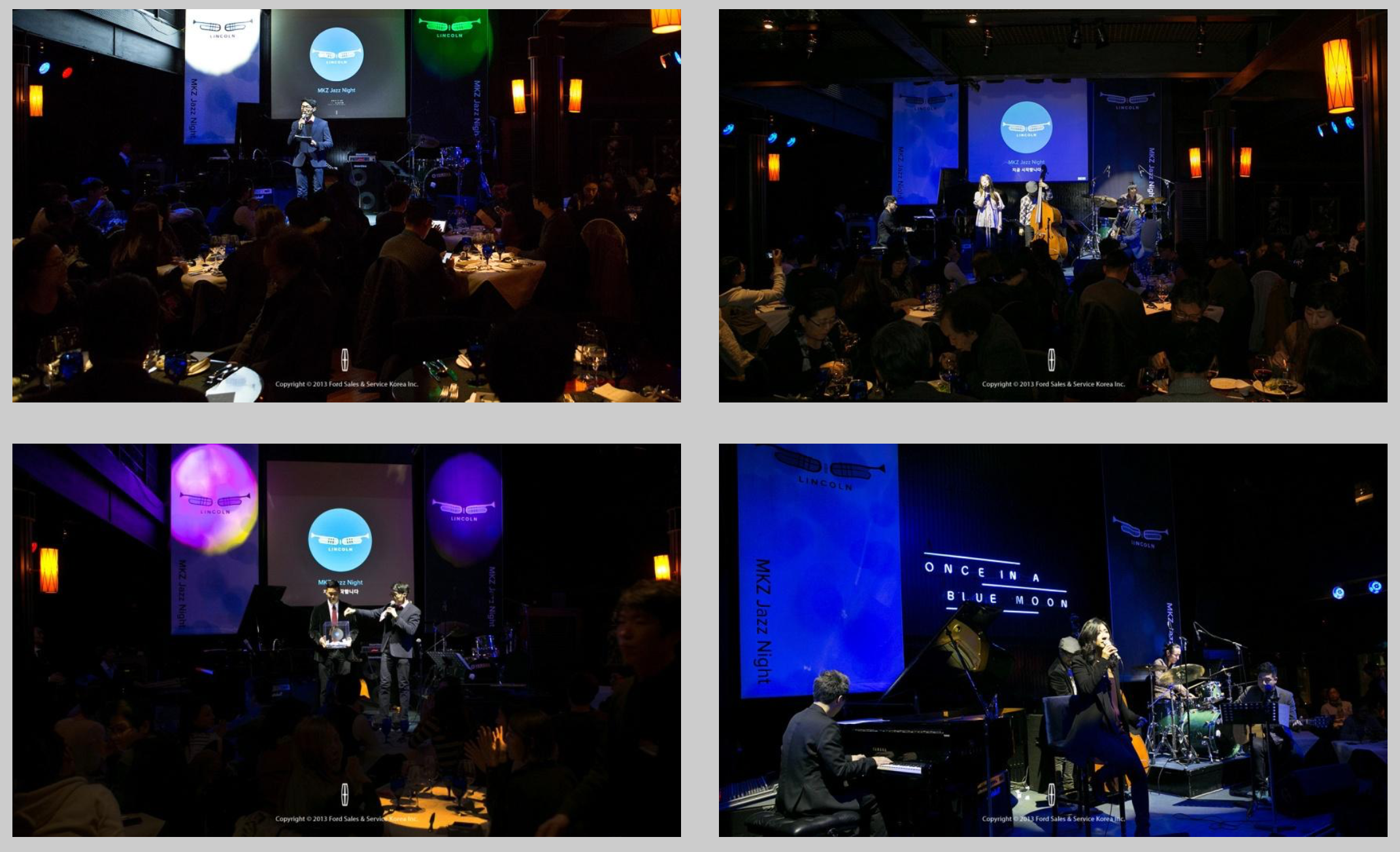 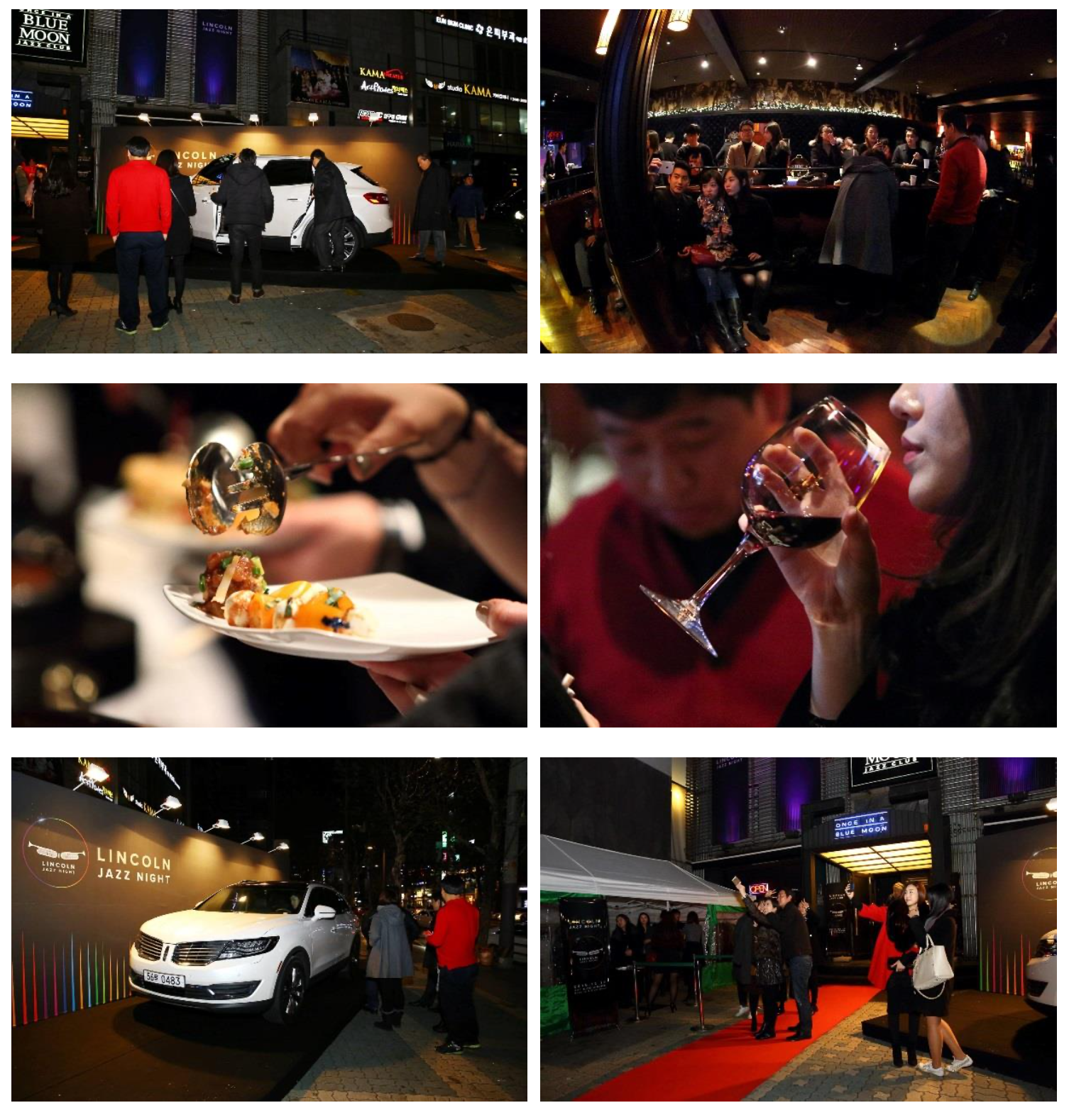 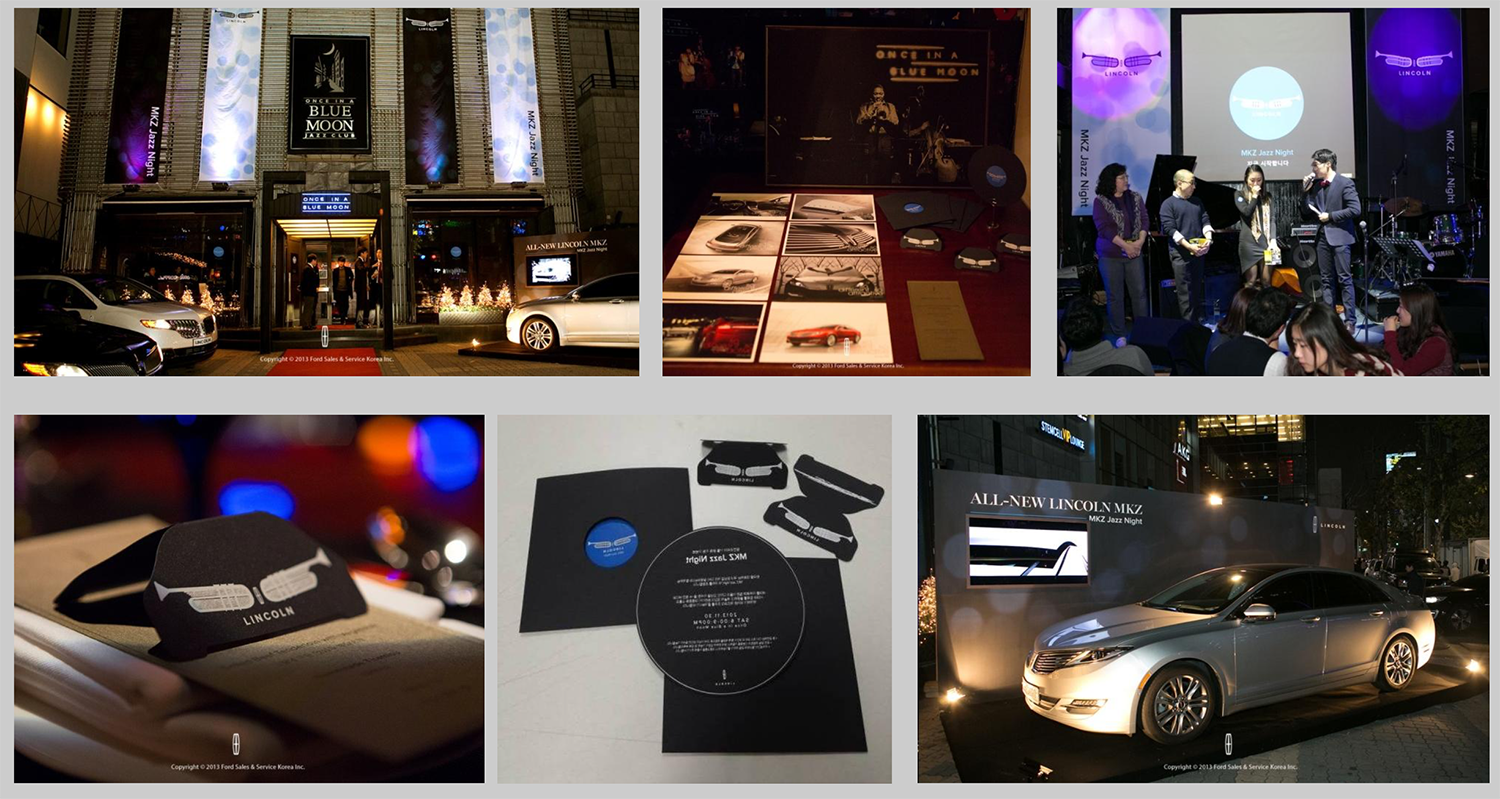 "The invitation cover with clever logo design gives a very high-class impression. Also, the design of the physical experience clearly represented where Lincoln brand is heading to."

"This jazz night defines innovation. The combination between jazz and an auto brand represents a fresh yet elegant approach in the name of Lincoln. To me, it was refreshing and I hope to see more of this type of event in the near future."

"The combination between jazz and an auto brand was very fresh yet creative idea for Lincoln’s philosophy and value. Overall atmosphere of the event looks elegant and jazzy including all of the details to decorative items from entrance to even restroom! I really look forward to seeing Lincoln’s next step."